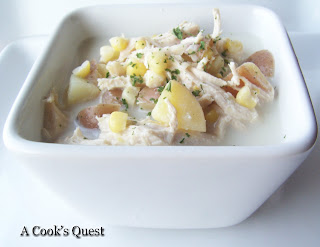 Soups, Stews, and Chowders.  All three go hand in hand with cold weather.  There is just something about these warm, thick, rich meals that makes a person feel good.  They are relatively easy to prepare, easy to serve, and even easier to eat.  I grew up eating potato soup, and my kids are doing the same but it is time to learn how to make new variations of one of my favorite comfort foods.

Because I am home sick today, and because the groundhog saw his shadow a few weeks ago and we are being subjected to a longer winter, I decided today was going to be a soup day.  Over the weekend I did a huge search of soup recipes and a popular version I saw a lot of was Chicken Corn Chowder, a creamy, rich, and sweet combination that is reminiscent of my mom's potato soup but completely different at the same time.  Most recipes I read required longer cooking times, a lot of ingredients, and me, the cook, standing watch as everything cooked away--not something I was willing to do on day when all I wanted was to be sleeping away on the couch.  I had to think of an easy way to make a chowder that everyone would love, luckily I remembered my trusty slow cooker and I was able to get started.

Traditional corn chowder usually calls for corn on the cob.  The cook cuts the corn off the cob and sometimes, depending on the recipe, boils the cobs in milk so the starches are released adding a natural thickening agent and more flavor to the final product.  Well even if I was able to get fresh corn from my favorite vegetable stand during February, there is no way that someone on this much cold medicine should be handling a big knife in order to extract the little kernels of corn off the cob--so canned corn it is.  With some other modifications I came up with the recipe below. It is a simple, unfussy version of a classic soup.  I hope you enjoy it as much as we did, all four members of my tasting crew deemed it worthy of making again. 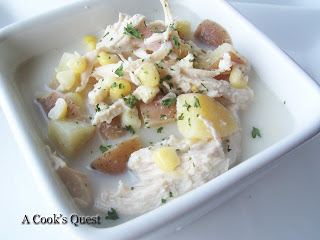 Add the first four ingredients to the slow cooker.  Cook 3-4 hours on high or 5-6 on low or until your chicken is cooked enough that you can shred it easily.

After shredding the chicken, add the potatoes and continue cooking until they are tender.  Add milk and corn and cook until warmed through.

**If desired, you can thicken with a little cornstarch and water or with a tablespoon of softened butter combined with 2 tablespoons of flour.  Add your thickener and cook into the chowder on high until thick and creamy** 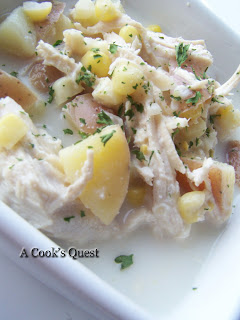