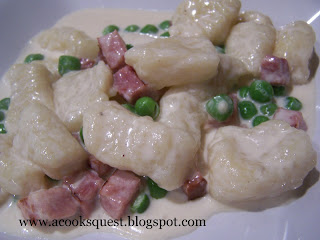 Gnocchi (pronounced nyō'kē) is a recipe that I had never even considered preparing....ever.  I had a myriad of reasons, they look too time consuming, they must be hard to prepare, potatoes in pasta sounds weird, you get the idea.  But, after seeing gnocchi recipes on every good Italian site or in every good Italian cookbook I was finally convinced that maybe, just maybe, there was something to these little potato pastas.

I was waiting for the perfect day to try my hand at this new dish.  When my parents offered to take the kids for a few days over spring break I decided it was time.  Not only would I have the time with no interruptions to make the dish, but then my hubby and I could have a special dinner together when he got off of work.  So I stopped at the store after work and made the choice to put these gems in a cream sauce made with heavy cream (it's a special ocassion don't give me too much flack,) ham and peas.  I was hoping for asparagus, but I went into sticker shock at the price this week and opted out.

After baking the potatoes to crispy loveliness, mixing the dough, and then rolling and shaping the pasta I had a meal that I was very impressed with and that both my husband and I devoured.  The gnocchi were like pasta, but like a dumpling too.  They were tender morsels of potato dough goodness that paired beautifully with the creamy rich sauce created by the cream.  This is yet again, a dish that can be adapted to whatever you want.  Add gorgonzola cheese instead of parmesan, or use marinara sauce instead of cream sauce and add some fresh summer veggies for a healthier version.  It is all up to you, your budget, and most importantly your taste buds.  Enjoy! 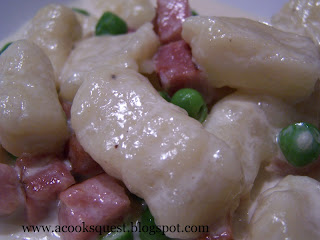 Gnocchi
Recipe Source: A Cook's Quest
Makes 2-4 servings depending on size.  This recipe can easily be doubled, tripled, etc. for larger families.

Bake the potatoes at 425 F until cooked all the way through.

Cut potatoes in half, and using a fork scrap the inner flesh of the potato into a bowl. (Don't throw the skins away.  I have a recipe coming that will use them in a new way.  Wrap them in plastic wrap and put in the refrigerator or freezer.) Try not to mash the potato, but almost shred it into the bowl so the potatoes stay light and fluffy.  If you have a ricer or food mill you can also run the potatoes through it for a more uniform size. 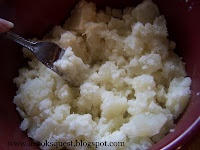 Add flour, salt, pepper and garlic powder and toss gently to combine.  Make a well in the center, and add the egg.  Carefully combine all the ingredients until well combined.  Turn the dough out onto a floured work surface and knead gently and form into a ball. 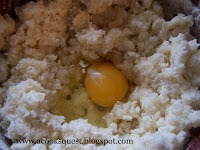 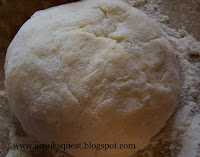 Cut the dough into fourths.  Roll each fourth into a long rope about 3/4 of an inch in diameter.  Cut the rope every 1 inch to make the individual gnocchi. 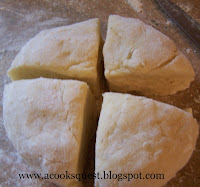 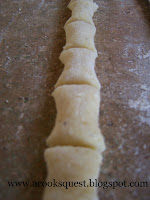 Next come the fun part.  Putting the ridges on the pasta.  It takes a little bit of practice, but I decided that I personally prefer them to look a little "rustic" and luck for me, I am good at that method!  Using two forks, place a piece of dough between them and roll gently.  The tines of the fork will create indentations on the pasta which will help hold the sauce. 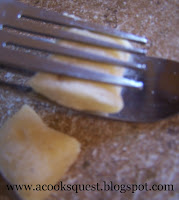 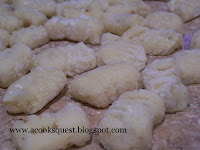 Heat a pot of water or chicken broth (my preference) to boiling.  Drop the gnocchi in.  You will want to do this in batches so the pot doesn't become over crowded.  Gnocchi are called the smart pasta because they sink when first placed in the boiling liquid, but float to the top when almost done.
After the gnocchi float to the top, continue simmering 2-4 minutes until done all the way through. Drain well. 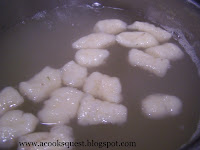 While cooking the gnocchi, start your sauce.  In a pan, saute ham until it starts to brown.  Add garlic and cook for a minute stirring constantly to prevent it from burning. 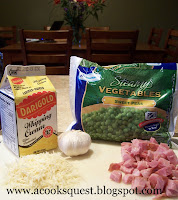 Add the cream and allow to simmer gently, stirring often.  Add the cheese, and frozen peas continue simmering until the cream has thickened to your liking.  Add in the gnocchi and heat for one minute.  Plate up and enjoy with someone you love! 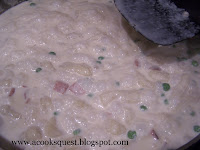