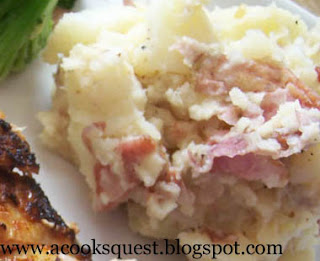 Potato salad in my house doesn't last long.  I typically stay with my usual recipe but occasionally I will get a wild hair and use Dijon mustard instead of regular, or even, GASP, different pickles.  But, for the most part the potato salad that this cook serves up is creamy, delicious and very predictable.

Yesterday, while I was contemplating what to serve with the grilled chicken we had, I started looking up potato salad recipes.  How is it that I never thought of putting bacon or cheese into it?  I also found versions calling for capers, vinaigrette dressings, and many other assortments of tasty ingredients.  I decided to make up a recipe of my own, something new that I could make and surprise my family.

The result was a fabulously flavorful, simple salad that paired wonderfully with the grilled chicken rubbed down in that tasty rub.  It is slightly reminiscent of a German Potato salad but the dressing is creamier from the blue cheese dressing, which adds a wonderful tang to the bacon dressing.

I Linked this recipe to THIS WEEK'S CRAVINGS linky part over at Mom's Crazy Cooking
Warm Potato salad with Bacon Blue Cheese Dressing
Recipe Source:  Jenn at A Cook's Quest

2-3 pounds red potatoes
Chicken Broth or water
6 slices bacon (sliced thinly)
1 small onion
1-2 tablespoons flour (depends on how much grease is rendered from your bacon)
1/8 teaspoon cayenne pepper
1/2 teaspoon dry mustard
1/2-1/3 cup apple cider vinegar (this will depend on how much flour you needed, and how thin you want the dressing)
3-5 tablespoons blue cheese dressing
Salt and Pepper

In a large pot, boil the potatoes in chicken broth or water until fork tender.  Drain and allow to cool for a few minutes while you make the dressing.

In a small saute pan, brown your bacon and saute the onion.  When the onion is soft and bacon is crisp add the flour and make a roux.  Add the cayenne pepper, dry mustard and salt and pepper to taste.  Whisk in the vinegar making sure to smooth out any lumps from the flour.

Slice your potatoes, which are still warm into a large bowl.  Add the bacon dressing, (if it has thickened up on you then add a little chicken stock or water), add the blue cheese dressing.  Stir to combine and season with salt and pepper to taste.

Total Cost-I have no idea!  It can't be too much, but the potatoes and bacon both came from Hubby's shopping trip.  I'm going to guess this at less than $2.00.