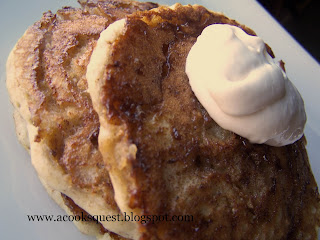 What could be wrong with a pancake and a cinnamon roll combined?  If you said nothing at all, you are 100 percent correct!  Not only are these pancakes made using the best ever pancake mix ever, ever, ever, but now they are even better with a sweet, cinnamony (another one of my words) swirl made from the exact ingredients that go into a cinnamon roll filling.  Then, as if they weren't fabulous enough they are topped with, what else I ask you, cream cheese frosting.  Oh my. Oh my.  This recipe is far past breakfast fare it is now dessert at 8 in the morning.  Can it get any better? 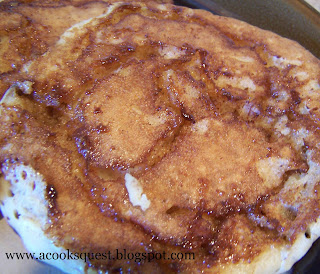 For the Cinnamon Filling...

Using a rubber spatula to scrape the sides, pour this mixture into a large pastry bag or ziplock bag that had been opened and stood up in a tall tumbler or into a squeeze bottle. I prefer the squeeze bottle because it doesn't leak into the tall tumbler but either works well.

For the Cream Cheese Icing...

In the same bowl that you used for the cinnamon filling, mix together, using the hand mixer again:

Mix until smooth and set aside.

Prepare you favorite pancakes according to directions.  I used my favorite pancake mix found here.
In a large non-stick skillet, over medium to medium-low heat, and using a 1/4 cup dry measuring cup, ladle pancakes. Snip the tip off the pastry bag containing the cinnamon filling so that the opening is a scant 1/2 inch wide.  Using the bag or a squeeze bottle swirl the cinnamon filling mixture over cooking pancakes in a circular motion (don't wait to long after ladling the batter or the cinnamon mixture will just roll off). 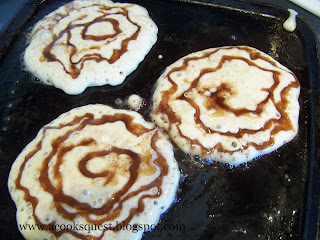 Continue to cook the pancakes until bubbles form evenly through each cake. Gently flip each pancake over and cook another 30-45 seconds, remove to a serving platter and serve immediately or keep warm covered in a warm oven. Continue with the rest of the batter.  Serve each person 2-3 pancakes drizzled with the cream cheese icing or dolloped like we did.  Add fruit, powdered sugar, or maple syrup if desired.
Note- Using a damp paper towel, wipe your skillet after each pancake is made. This will keep the next pancake from sticking to any of the cinnamon filling that has leaked onto your skillet or griddle.

Store any leftover icing in the refrigerator for future use.

Total Cost I'm not entirely sure.  I just discovered that I never did a cost break down for the pancake mix.  It isn't much considering none of the ingredients cost a whole lot.  Forgive me please...just this one time.