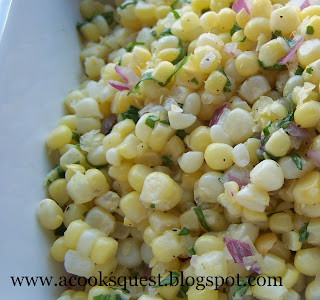 I've said it before, but I'm going to say it again I love the produce in the area I live.  Not only is there fresh vegetables to be found all summer long, but people love to share their harvests with friends.  My most recent score was a huge box of corn from one of the customers from my work.  He grew the corn himself then brought some into the bank for all of us.  Much like the cherries from earlier in the year my co-workers took what they wanted from the box and I got the rest. 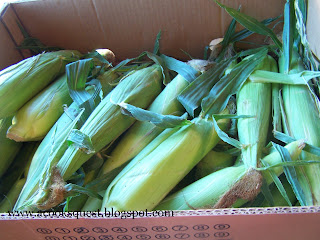 Now, I love corn on the cob but a girl can only eat so much. And aside from the typical, shuck, boil, cut off the cob and freeze method I didn't know what else I was going to do with all this corn.  Then, by mere accident I stumbled onto this corn salad recipe while I was browsing recipes at The Sister's Cafe.  The original came from Ina Garten, and like the sisters I didn't alter it other than reducing the amount of salt.

Something about the sweet corn, the bite of the onion and the tanginess of the vinegar combining with the fresh basil makes for such a light and refreshing, yet hardy side dish.  We ate it at a family BBQ and the corn paired fabulously with the burgers and brats.  Tomorrow I will post a reader recipe, from one of my co-workers for homemade cream corn.  YUM! 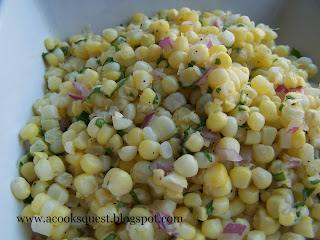 In a large pot of boiling salted water, cook the corn for 3 minutes until the starchiness is just gone. I boiled the corn for this salad and also for the freezer all in one pot, hence why I have so many ears. 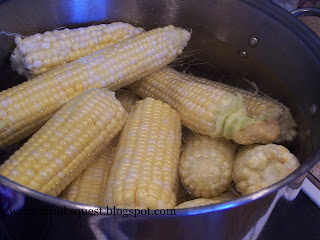 Drain and immerse it in ice water to stop cooking and set the color. When the corn is cool, cut the kernels off the cob, cutting close to the cob.

Toss the kernels in a large bowl with the red onions, vinegar, olive oil, salt and pepper. Just before serving, toss in the fresh basil. Taste for seasonings and serve cold or at room temperature.

**Cook's Note-This salad doesn't look like much, but trust me it is dense.  Next time I'm going to grill a few of the ears of corn to add some extra flavor.

Email ThisBlogThis!Share to TwitterShare to FacebookShare to Pinterest
Labels: Salad, Side Dishes, vegetables