Now, I don't want to alarm anyone, nor do I want to cause mass rushes on local grocery stores but I thought it was my duty as a cook to let you all know that there is a national canned pumpkin shortage.  I know, scary isn't it?  My local grocery store says they can't even begin pre-ordering the canned goodness for the holidays because it is simply unavailable. The New York Times reports,

"Heavy rains in the Midwestern states where most commercial pumpkins are grown have caused the problem. Soggy fields have made it difficult for farmers to get harvesting equipment to the pumpkins. As a result, the harvest, which usually begins in the Midwestern pumpkin fields in August, was late in coming. Acres of pumpkins sit still unharvested in Morton, Ill., which the company calls the “pumpkin capital of the world.” Fungus is a big problem, so it is likely many of those pumpkins will be plowed under." 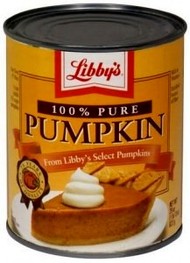 So my fellow bakers if you are so inclined, I suggest cooking down your own pumpkin from a lovely farmer's market or snatching up the few cans that may be left.  I have heard rumor that cans are selling on E-bay for $30 per can but I have not confirmed this yet. Let me know what you are going to do and I will do my best to get you a recipe for homemade pumpkin filling

Email ThisBlogThis!Share to TwitterShare to FacebookShare to Pinterest
Labels: Announcement