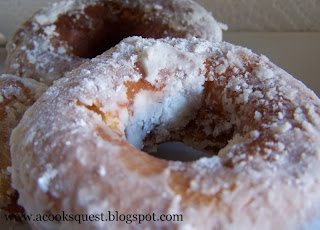 Oh, the glorious donut!  Frosted, Glazed, Fried and Baked...any way you make them the donut is delicious.  I have seen them covered in sprinkles, coconut, and sugar, sprinkled with bacon, filled with anything you can think of and topped with any flavor icing you can imagine. In honor of the sweet breakfast treat I am re-posting one of my early recipes.  These donuts are best warm and remind me of when I was little and we made homemade donuts. 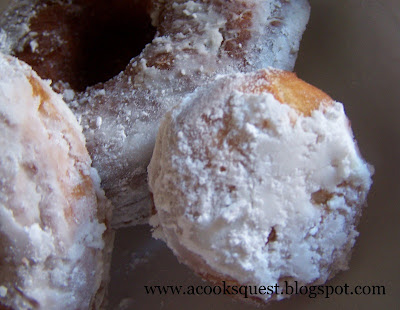 In a large mixer bowl combine 1 1/2 cups of the flour and the yeast. In saucepan heat milk, 1/3 cup sugar, shortening, and salt till warm (115 F to 120 F) and shortening is almost melted, stirring constantly. Add to flour mixture in mixer bowl; add eggs. Beat at low speed for 1/2 minute, scraping sides of bowl constantly. Beat 3 minutes at high speed. Mix in as much of the remaining flour as you can to form a soft dough. At this point you can knead by hand or continue letting the mixer run and allow it to do the kneading for you. Knead until smooth and elastic (5-8 minutes). Shape into a ball. Place in a lightly greased bowl, turning once to grease surface.

Cover dough and let rise in a warm place until doubled. Punch dough down; turn out onto a lightly floured surface. Divide in half. Cover; let rest 10 minutes. Roll each half of dough to 1/2-inch thickness. Cut into doughnuts using a floured doughnut cutter with hole in center--or a glass like I did and then cut circles out of the middle with a small round cookie cutter. Cover and let rise in a warm place till very light and fluffy (35-40 minutes). Fry a few doughnuts at a time in deep hot fat (375 F) till golden, about 1 minutes on each side. Drain on paper toweling. If desired, dip warm doughnuts in glaze or shake in a bag of powdered or granulated sugar. Makes 15-18 doughnuts.

Chocolate Doughnuts: Prepare doughnuts as above except heat two 1-ounce squares of semisweet chocolate with the mil, 1/3 c sugar, shortening, and salt. Cover and let dough rise 1 to 1 1/2 hours the first time. Cut with cutter. Let rise. Fry in deep hot fat (365 F) about 1 minute on each side. Dip warm doughnuts in Chocolate Glaze, then in 1/2 c finely chopped nuts, or shake in sugar.
Chocolate Glaze: In a saucepan, melt 2 oz chocolate and 2 T butter or margarine over low heat. Add 2 cups sifted powdered sugar and 1 tsp vanilla. Stir in 1/4 c boiling water until smooth