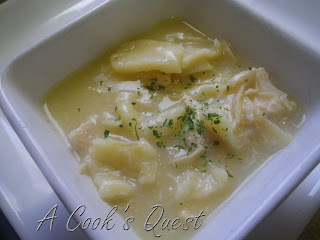 On a cold day there is nothing more comforting to me than a bowl of warm soup.  I love making it, I love eating it, and I love the leftovers.  This year I decided to try chicken and dumplings rather than my traditional chicken noodle soup.  I have always avoided dumplings because I thought they were hard to make.  I was wrong, they were easy peasy to make!  As a result,  I instantly fell in love with the tender dumplings, flavorful chicken, and thick broth.

On top of easy to make, this recipe is super inexpensive; especially if you make your own chicken broth.  This meal has become one of my quick go to meals because it can be made in about 30 minutes.  I did cut down the portions of the dumpling recipe because I always ended up with too many dumplings, but you can easily increase them if you want a higher dumpling:chicken:broth ration.  ENJOY!

In a large pot, bring the chicken broth to a simmer.

While the broth is coming to a simmer, combine the flour, baking powder and salt.  Cut the butter into the flour mixture until it is well incorporated.  You can use a fork, your hands, or a mixer for this step.

When the butter is well incorporated, stir in the milk.  Mix with a fork until the ingredients form a ball.

On a heavily floured work surface, shape the dough into a disc.  Roll it out about 1/8 in thick.  Using a pizza cutter, cut the dough into squares about 2x2.  If they aren't perfect it is no biggie :)  At this point the dumplings can be frozen or stored in the refrigerator.  Flour a piece of waxed paper and place the dumplings on the wax paper.  Freeze them in a single layer then transfer to a baggie or store them in the refrigerator on the wax paper.