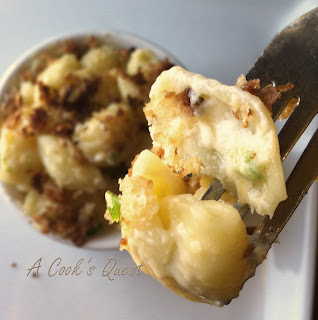 It's Secret Recipe Club reveal day!  This has become one of my favorite events each month.  This month I was lucky to be assigned Healthy. Delicious. as my blog to choose a recipe from.  Lauren loves to cook and has a blog full of tasty AND healthy food.  I had a lot of trouble choosing a recipe because Lauren's blog is full of amazing food, and since she has been blogging since March of 2007 there were many tasty recipes to choose from!  Finally, I narrowed my choices down to three: Pear and Raspberry Brie Puffs, Brussel Sprout Salad with Maple Vinaigrette, and Jalapeno Popper Mac and Cheese.  I settled on the Mac and Cheese because homemade mac and cheese is one of my all time favorite dishes, and jalapeno poppers are a favorite appetizer of mine.  Both have cheese, and in my book cheese bumps a recipe to the top of the rankings.

Let's get to business about this recipe.  I love that Lauren took a favorite unhealthy recipe of mine and lightened it up.  This mac and cheese is made with reduced fat cheeses and vegetable stock.  The addition of cream cheese helps create the jalapeno popper flavor, while also keeping the final product creamy--which is how mac and cheese should be!  There is a smokey flavor from the bacon, crunchy breadcrumb topping, and, the best part, diced jalapenos dotted throughout the entire dish.  Is a party in your mouth! 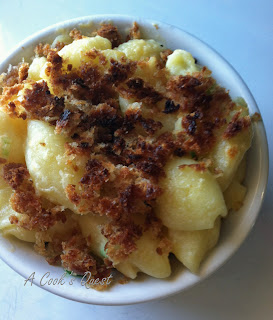 To make this dish kid friendly, I chopped the jalapenos very small and also reduced the overall amount to three peppers instead of eight.  If it were just the hubby and me, I could have left it as the original recipe stated.  I also increased the cream cheese to six ounces. This was an accident because I didn't pay attention, though it was a good accident.  The extra cheese only helped the dish have a creamy texture and gave it more flavor.

Overall, this is one of my favorite Secret Recipe Club recipes that I have posted. It was delicious and a HUGE hit for the entire family.  ENJOY! 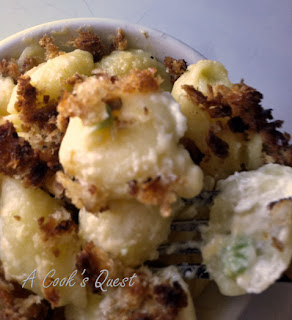 Bring a large pot of salted water to a boil. Cook pasta according to directions on the package until al dente.  Don’t overcook the pasta!

While the pasta is cooking brown the bacon, in a large sauce pan over medium heat.  Allow to get crispy then remove from the pan and drain on paper towels.  Leave the grease in the pot.

Slowly stir in the Cheddar and Pepper Jack cheeses, adding a little at a time and letting it melt completely before adding more. Don’t add the cheese too quickly or the sauce will become grainy.  Stir in the cream cheese. Mix in the crumbled bacon, if using.

Combine the cooked pasta and cheese in a shallow baking dish or individual ramekins. (At this point no one will know if you sample a few bites!)  Sprinkle a thin layer of bread crumbs over the top. Broil 3-5 minutes, or until bread crumb topping is crispy and golden brown.