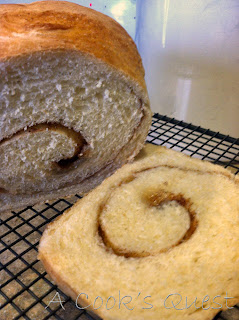 As I have mentioned a time or two on this blog, I LOVE bread.   In the past, I have made all kinds of recipes from delicious orange rolls, to satisfying bread sticks and bread bowls for hearty soups.  But, my all time favorite way to eat homemade bread is in the form of toast.

Now, I am not a toast snob.  I really love any kind of bread as toast.  Whenever I make a loaf of Oatmeal bread, or no knead bread I save a slice for a snack or breakfast.  Then I toast it up and cover it with butter...oh, it is so good!  A few days ago, as I was sprinkling said toast with some cinnamon and sugar, and I realized that I had never made cinnamon swirl bread.  That was about to change! 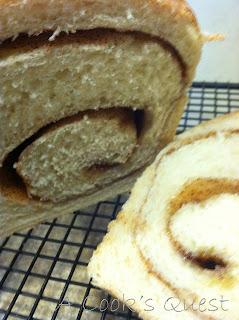 I went on a quest to find a recipe.  Luckily,  I had one already pinned on my Breads page on Pinterest.   It comes originally from Babble.com.  The author, Jaime, originally posted the white bread recipe on her blog, Sohpistamom, and the Cinnamon Swirl Bread on Babble.com.

As bread recipes go, this one is basic and produces the most wonderful bread. But, it can also be combined with cinnamon and sugar to make a loaf of Cinnamon Swirl Bread. That is what I did and I am so happy that I did.  There was just enough cinnamon, sugar, butter mixture swirled between layers of the bread dough.

There are two ways to create the cinnamon swirliness (new word!).  The first is to mix an egg white with sugar and cinnamon, spread it on the dough, roll up and bake.  The second method is to spread butter on the dough, cover it with the cinnamon and sugar, roll up and bake.  I tried both versions, and discovered the egg white method just didn't turn out for me.  I ended up with a soggy, collapsing loaf of bread.  So I tried the second method and loved the results.

Which ever method you like, I urge you to try it soon. You will love it and so will your family, ENJOY!

*Cinnamon Filling:
4 tablespoons softened butter
1 cup sugar
3-4 tablespoons of cinnamon (this depends on how cinnamony you want your bread)

*I tried both fillings and prefer the one with butter.  This is something you will have to try out on your own.


In a small bowl combine the water, oil, and honey.  Set aside.

In the bowl of your mixer, combine the yeast, 3 cups of the flour, and salt.  Mix for a few seconds to make sure everything is well combined.  Slowly add the wet ingredients to the dry.  If needed, add some of the reserved 1/2 cup of flour.

When the dough cleans off the side of the mixer bowl, you are ready to knead.  I let my mixer do this for me, but you can do it by hand as well.  Knead the dough for about 10 minutes.  Remove from mixer, roll into a large ball and then place in a greased bowl.

Cover the dough, and allow it to rise until almost double in size in a warm place in your kitchen, about 30-40 minutes.  I use my oven with the light on for the first rise.

When the dough has risen, gently deflate it.  Roll it out into a rectangle that is roughly 5 inches by 14 inches.  Spread the dough with softened butter and cinnamon sugar. 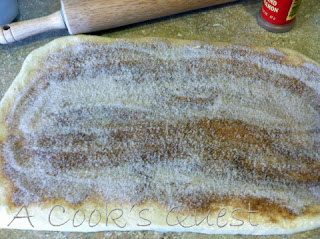 Roll up tightly from the narrow end. 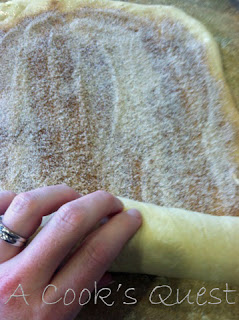 Place the dough into a grease bread pan. 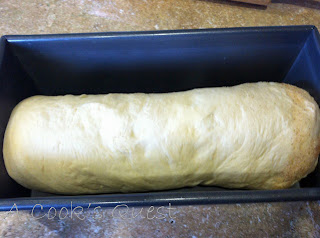 Again, cover and let it rise in a warm place. While your dough is rising, preheat the oven to 350 F.

Once the dough has risen, place it in the oven and bake for 25-35 minutes.  Remove from pan and allow to cool, if you can! 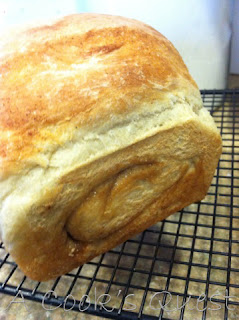