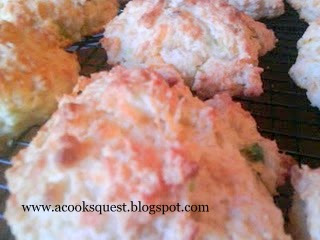 Hi. My name is Jenn and I am a bread lover. It doesn’t matter what kind, if it is made with flour and leavening of some kind I will more than likely eat it. Bread is what I look for at every meal, warm and delicious, usually with butter smeared on it and a wonderfully golden crust that can soak up whatever is on my plate. If I had my way, I would have a bread of some kind every night with dinner, but let’s face it, even simple recipes take time and time is not something I have a lot of. Usually I can get by with tortillas when we have a Mexican dish, or even just a slice of sandwich bread but without bread my meal just doesn’t feel complete.

I found this biscuit recipe last week while the Million Dollar Pound Cake was baking. I was looking for a bread recipe that was fast, easy and versatile for weeknight cooking. Nothing with yeast, and nothing that required too much fussing over. This recipe immediately jumped out because it isn’t in anyway a sweet biscuit recipe…perfect for dinner! This isn’t the kind of biscuit that one would cover in jam, in fact it doesn’t even need butter because there is enough butter in the dough . Because there are eggs in it, the texture is almost like a scone, dense but not heavy, flakey but definitely not dry. Thanks to the cheese it has an amazing flavor that doesn’t overpower your meal. It is the kind of recipe that any home cook could make their own by adjusting the seasonings to their own liking without compromising the integrity of the biscuit. Oh, and did I mention there is no rolling? Nope, none at all. This is a drop biscuit recipe…I am in HEAVEN I tell you!! I will definitely make this again and I am going so far as to say, it is my favorite biscuit recipe ever, just don’t tell my dad who would scoff at the idea of a biscuit being dropped by spoonfuls instead of rolled out with a rolling pin. Enjoy! 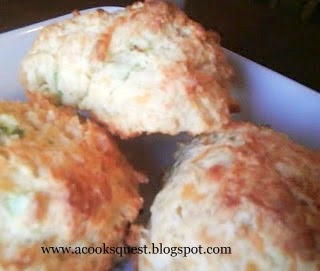 **I am posting this recipe as I made it. I used all white flour instead of half white and half whole wheat, I added cheddar cheese instead of using just 4 oz of swiss and I increased the milk to 1 cup. This flavors in this recipe could easily be modified to fit your menu**

In a large bowl, combine the flour, sugar, baking powder, onion salt and baking soda. Cut in butter until mixture resembles coarse crumbs. Stir in the cheese and onions. Combine eggs and buttermilk; stir into cheese mixture just until moistened.

Drop by tablespoonfuls 2 in. apart onto greased baking sheets ( I used stoneware and didn’t grease them). Bake at 425 for 12-15 minutes or until golden brown. Serve Warm.

This recipe is supposed to make 24 biscuits, but I was pretty generous with my tablespoons and only ended up with 18.

Total Cost about $3.19 or .17 per biscuit
Depending on what you spend on your milk and cheese this recipe could easily cost less, but my swiss cheese wasn’t on sale when I bought it.