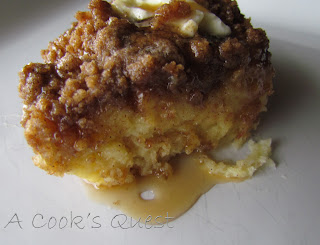 A while ago, my friend Ellie sent me this recipe to try. We used to work together in the same office before I left my job at that company.  At work we always talked food and shared recipes that we had tried.  When I started this blog she gave me ideas and was one of my first blog followers.  She was a huge supporter of me as I chased after my dreams of becoming a teacher.  I knew that when she sent me this recipe it had to be good, because her recipes always are.

I tried it soon after she sent it to me.  I have made it many times since.  But, I never took the time to take pictures and type a post about it.  I knew that it had to be shared because it is the best baked french toast I have ever had.  Finally here I am sharing it with all of you. 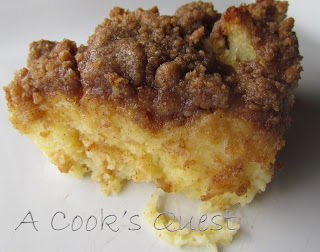 This recipe originates from the Pioneer Woman's website.  Now, there is another clue it's good. If the Pioneer Woman makes it, it is good!  The first time I made it, I followed the recipe exactly.  But, then decided to make some changes.  First up, I decided to use my own cinnamon swirl bread to add some more cinnamon swirl flavor.  Second, I used regular milk instead of heavy cream.  I don't usually have heavy cream on hand, and regular milk worked just fine for me.  Finally, I cut the bread portion of the recipe in half, but kept the cinnamon topping recipe intact because my family really, REALLY loved the cinnamon topping.  If you want to see the original recipe it is on Ree Drummond's site.  ENJOY!


Grease a 9x9 pan.  Place bread in the pan evenly.

In a bowl whisk together the eggs, milk, sugar, and vanilla.  Pour the egg mixture over the bread.  Cover with foil and refrigerate overnight.

Next, combine the cinnamon topping ingredients until crumbly.  Place in a baggie and refrigerate overnight.

In the morning, pre-heat your oven to 350 F.  Remove the foil from the bread and egg mixture. Spread the cinnamon topping mixture over the top. 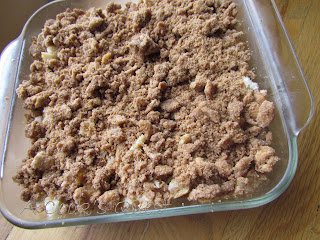 Bake for 45 minutes to achieve a custard like texture or 1 hour for a firmer texture.  (The top and sides will be golden brown) 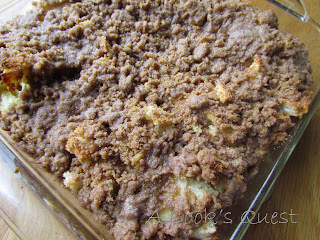 **If desired, you can sprinkle fresh fruit on top of the bread before the cinnamon topping goes on.